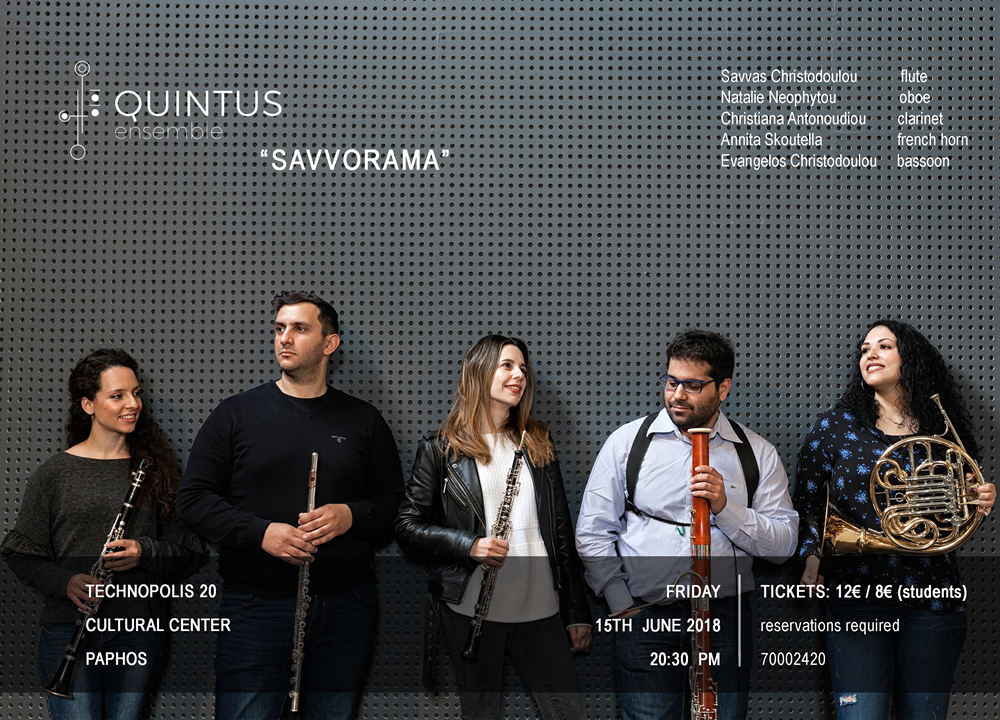 ‘Savvorama’ with the Woodwind Ensemble “Quintus”

The Woodwind Ensemble “Quintus” will present the music performance “Savvorama”, an atmospheric music performance based on the music of the great Greek singer-songwriter Dionysis Savvopoulos, at Technopolis 20 garden in Paphos, on Friday, 15th of June 2018, at 8:30pm.

With a different approach and with regard to the melody, the ensemble will offer to the audience a musical journey to the music of Savvopoulos. All of this under the orchestration of Neoklis Neophytides.

A few words about the musicians

Savvas Christodoulou was born in Limassol and he started having flute lessons at a young age. In 2005 he moved to Prague to study flute performance on Prague National Conservatory from where he graduated in 2010. In the same year he was accepted in Utrecht Conservatory to study with world famous flute soloist Aldo Baerten. He obtained his Bachelor degree on flute performance and education with honors in 2012. In addition he studied piccolo with Gudrun Bourel and Baroque performance with the “Master” of Baroque flute Mr. Wilbert Hazelzet.
In 2015 he obtained his Master’s degree in flute performance on stages. He participated in several Masterclasses worldwide with famous flutists. He was a member of the Symphony orchestra of Prague Conservatoire and Utrecht as well. He appears regularly in flute recitals and chamber music concerts in The Netherlands, Belgium, Czech Republic, Greece and Cyprus. Since June 2015 he is a substitute member of Cyprus Symphony Orchestra and he is teaching flute at Ethnikon Odeion of Cyprus and Windcraft music center.

Born in 1991 in Cyprus, Natalie Neophytou graduated in 2013 with First Class Honours from the Royal Academy of music in London where she gained a postgraduate scholarship to study oboe with Melanie Ragge and cor anglais with Sue Bohling. First prize winner of the ‘Leila Oboe Prize’, Natalie began her music studies from an early age studying piano, oboe and theory in Cyprus. Before attending the Royal Academy, she completed her bachelor degree in oboe performance at the Guildhall School of Music and Drama in London.
As a freelance performer Natalie is an extra player of the Cyprus Symphony Orchestra where she very often performs and has also worked with other professional orchestras like the National Radio Orchestra (ERT) in Athens, Orion Orchestra, Aleph Chamber Orchestra and Young Musicians Symphony Orchestra in London. Since 2016, Natalie works as an oboe teacher at the European University and the Music Gymnasium and High schools of Cyprus. Natalie is the Artistic Director and principal Oboe of the Cyprus Chamber Orchestra.

Christiana Antonoudiou was born in 1991 in Nicosia and started from an early age piano lessons and then clarinet lessons. She had been a member of the Intercollege Orchestra and the Cyprus Youth Symphony Orchestra, from which she had earned a scholarship to attend clarinet classes with Dusko Zarkovic. She earned a Bachelor Degree in Clarinet Performance from the Ionian University of Greece mentored by Yiannis Samprovalakis and she had also studied at The University of York through the ‘Erasmus’ exchange program mentored by Lesley Shatzberger. In 2010 she had earned the third prize at the Music Performance Competition of the Ionian University.
In 2012 she had performed as a soloist with the City of Athens Symphony Orchestra and she has also participated in concerts of the Cyprus Symphony Orchestra. Christiana works as a clarinet teacher in Nicosia and as a Cultural Officer at the Dancehouse Lefkosia. She is a member of the ‘Clarinettini Clarinet Quartet’ and the ‘Quintus Ensemble’, while she also participates with various other musical ensembles for performances in Cyprus and abroad.

Annita Skoutella is a skilled all-rounded musician with experience in many sectors of the music industry. Her areas of expertise cover; orchestral, solo and chamber performance (French horn and Piano). Annita graduated with a Bachelor Degree of Music in Performance at Royal Welsh College of Music and Drama and continued at Royal Northern College of Music achieving her Master degree of Music in Performance. She currently teaches piano and french horn. Also she teaches the Junior Brass ensemble in Cyprus Youth Orchestra.

Evangelos Christodoulou was born in Nicosia, in 1982 and began his musical studies taking guitar and music theory lessons. He received his Diploma in classical guitar with distinction. He continued his studies in the department of Music Studies at the Ionian University in Greece and earned his B.A. in 2007 with a specialisation in bassoon playing. He participated in concerts in Athens and Corfu as the principal bassoon player of the Ionian University Symphony Orchestra. He also have two Master degrees from the Royal Northern College of Music in the United Kingdom. During his post-graduate studies, he was awarded scholarships by the Nicolas Economou Foundation (2007-2008) and the Onassis Foundation (2008-2009).
He was also awarded the Entrance Award by the Royal Northern College of music. During 2006-2010, as a member of orchestras such as the Greek National Opera Orchestra, the ERT National Symphony Orchestra, the Orchestra of Colours, the Soloists of Patra, the State Orchestra of Cyprus and the Youth Orchestra of Thessaloniki, he participated in concerts in Corfu, Paris, Cyprus, Germany and the United Kingdom. During the academic years 2009-2010, he worked as a bassoon teacher at the Alimos Music School in Athens. Since December 2011, he has been the co-principal bassoon player in specialisation in contrabassoon in the ERT National Symphony Orchestra.
By July 2014 he was a co-principal bassoon player in Metropolitan Symphony orchestra of Athens. At the same time he was a music teacher at the 13th Primary School of Nikaia in Athens. Since 2014 he is a bassoon teacher at the Music Academy of the Cyprus Youth Symphony Orchestra. In addition since September 2015 he is a bassoon teacher at the English School in Nicosia. He is also an active member at QUINTUS ENSEMBLE, in Philarmonia Symphony Orchestra in Athens and in Cyprus Chamber Orchestra. 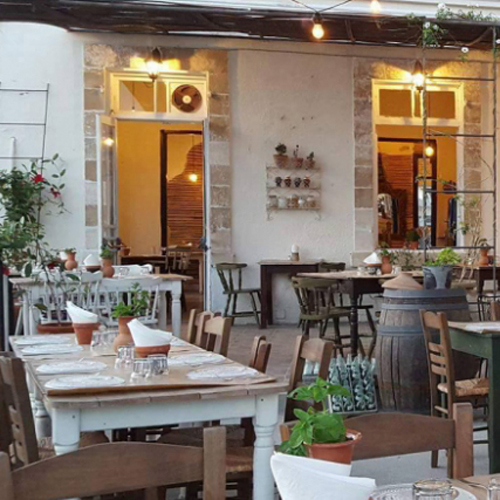 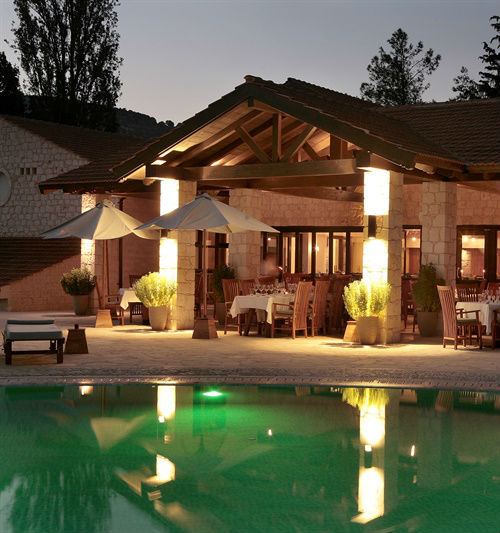